Testing Strategy in a Short-Term Project

Small projects are rather rare in our company, and the strategies and testing tactics used for long-term projects are not very suitable for them. In this article, we show you how to design a testing strategy for short-term projects and put it into practice.

How it all begins

Sometimes, we are approached by customers who need to quickly develop a small software product. For example, they may need a new website or smartphone app. There is not a lot of work required for such a project, and everything should be ready in a few months.

The customer will usually have an idea of their future users and basis for the project. The old site can act as such a basis. For instance, suppose that a site has served faithfully for a long time, but it is now outdated. It has no responsible layout, which makes it inconvenient for mobile users. According to the customer’s statistics, most of the user traffic comes from mobile devices. The desktop version of the site is used mostly by administrators who fill it with content.

Therefore, the customer in this case may want to transfer mobile users to a native application that contains the basic user experience. The functions required only by content managers would be available on the desktop version of the site.

As another example, consider a working website that suits the customer’s needs. In this case, the customer may want to develop a mobile application for the site, in which several small new features would need to be added.

This is what the development team gets at the start of the project. On short-term projects, the team is small and consists of a project manager, two or three programmers, a UX / UI designer, and a tester.

Where does testing begin?

Testing on a short-term project starts with ‘shift left’, or the principle of shifting testing closer to the start from its traditional place at the end of the production chain. That chain consists of the requirements definition, analysis, design, coding, testing and deployment.

The ‘shift left’ principle means that the team starts the testing not at the end of the development process, but from its early stages, by testing the concept, requirements and documentation.

Below, you will find a set of questions that will help the tester at the start of a short-term project.

1. Target audience and terms of use of the software

2. Material base of testing: what we are testing on

3. Integration with what is already there

After interviewing the customer and studying the basis of the project, we would get a detailed idea of the concept of the software that needs to be developed. We would then record this in the task tracker and the project wiki.

We would then move on to writing and testing requirements.

After the concept of the project is formed, we begin testing the requirements. Where do these requirements come from? Here, they come from the customer and are recorded by the project manager; then, the team is immediately put to work.

Requirements testing operates in parallel with programmers writing code and a UX designer developing a prototype. The task of the tester at this stage is to create the most complete and consistent description of the product and its work. In other words, the tester must describe the expected behaviour.

By describing the expected behaviour, the tester lays the basis for the checklists, thus revealing contradictions and empty spaces. Then, they find answers by asking programmers and the customer questions. This way, the team can catch some bugs even before the software gets checked, and sometimes even before the programmer writes the code.

The tester takes the requirements as they are. Let us suppose these are in the user stories format.

A user story consists of a title that represents the main use case and additional scenarios with more specific points and details.

Additional scenarios can be described in the acceptance criteria. We will show how they can be specified later.

2. Glossary of the project

Since user stories are written in natural human language rather than technical language, it is important to ensure the following:

a) The concepts mentioned in the story are understood in the same way by all participants in the development process. For example, by ‘exercise’, everyone should mean the same thing;

b) If synonyms are used in the description of one phenomenon—for example, ‘exercises’, ‘homework’ and ‘assignments’—then we are talking about the same phenomenon.

Here, we will be helped by compiling a glossary of the project. Using content analysis, we can look at the texts of user stories and determine which synonyms are used to refer to one phenomenon. We can then write these out in the glossary plate. After that, we can check our understanding of words against those of the customer and the programmer who has already taken the task.

After we determine the definitions of concepts, it is time to move on to restoring defaults and abbreviations. In ordinary communication, people rarely use such heavy sentences, but in testing, this approach comes in handy.

After restoring the defaults, we ask questions for more information:

4. Acceptance criteria: basis for the checklist

By testing requirements in this way, we benefit in two ways:

a) We concretise the acceptance criteria.

b) We lay the foundation for the checklist.

Next, we move on to creating the basis for the checklist. At this stage, we throw out phrases like ‘the system should ...’ and ‘also expected ...’. Then, we ‘squeeze out’ the text from ‘water’ to acquire a list of point-by-point requirements.

After the acceptance criteria have been fleshed out, we move on to the test design.

The user story header becomes the header for the review group. The acceptance criteria become the heading of a separate checklist or mind map where we write out and rank the checks.

What is the result?

Creation of test cases on short-term projects is usually impractical. The specificity of test cases is such that they lead to a detailed description of the steps, the expected system response and the final result. This is useful when the product is large and complex, development takes a long time and new people regularly join the team. Accordingly, test cases will be useful when connecting newcomers to the development, and for old employees when testing complex functionality with non-obvious steps.

In short-term projects, the product is small; the team is, too; and everything changes very quickly. It would take too much time to write and maintain test cases. They would constantly have to be rewritten, and time is so short. However, checklists and mind maps, which are used for testing, are the best choices of documentation for such a limited time frame. 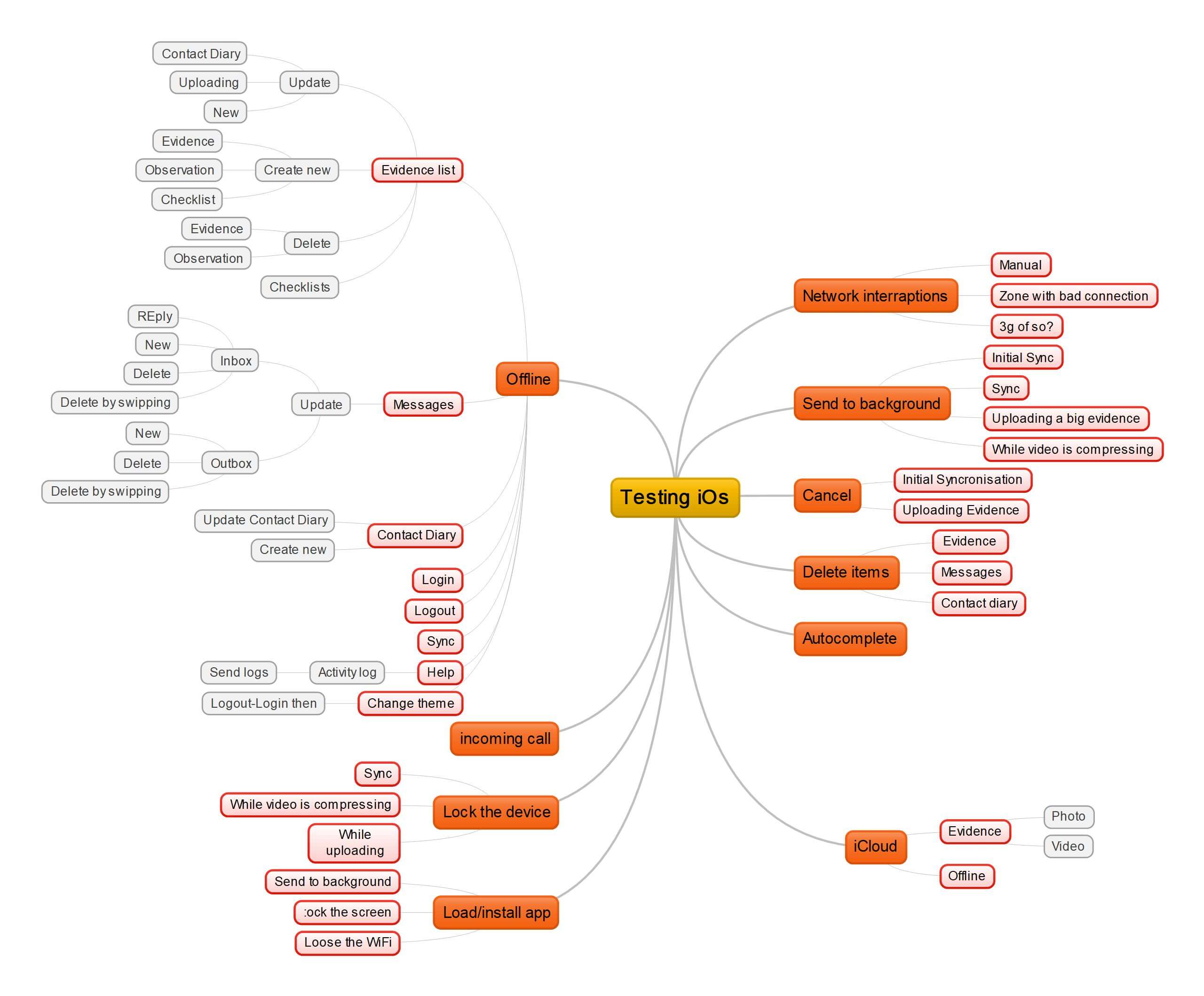 To create the most effective tests, we use test design techniques when developing them. For example, we could apply partitioning into equivalence classes, boundary value analysis and decision tables.

In parallel with how the tester writes checklists, the UX / UI designer creates a prototype. The tester checks the prototype interface, corrects checklists and discusses what is found with the team.

This is followed by a demo of the prototype for the customer. Based on the results of the demo, the team collects feedback and records the information received from tasks in the tracker and on the project’s wiki pages. If necessary, the prototype is sent for revision, after which re-testing, demoing and further development of the software product are carried out.

Specifics of testing in a short-term project

In short-term development, there is no ‘sprint planning—sprint—demo—retro’ cycle that we are all used to, but there are deadlines. However, there are user stories describing the functionality of different priorities, which are then implemented in this order. Testing runs in parallel with writing code.

To start testing a product, we need to deploy and configure a test environment, build and install a build and prepare the necessary test data. Only after all these steps have been passed will the tester be able to start testing.

We start with positive cases. We want to make sure that if the user does the right thing, they will get the expected result.

An example of a positive case

Then, we check the negative cases ‘that the user should never get out of it’.

Example of a negative case

Before release, the tester checks both the functionality described in individual user stories and the entire product. Specifically, the tester checks that the installation, update and removal of the product are proceeding correctly. The tester then gives feedback to programmers, fixes bugs in the tracker and refines the checklists.

Tracker bugs along with checklists help to maintain the product. The customer knows what defects are in the product and can then choose which ones to fix first.

At this point, our product becomes available to end users. The first reviews and bugs come from them. This is normal, since exhaustive testing at the initial stage is impossible, and there will still be some errors.

The specificity of custom development is such that technical support is provided by the customer, who then passes the bugs to the team. As a rule, bugs from users do not have detailed descriptions and require extensive investigation.

The task of the tester at this stage of development is to reproduce the bugs that came from the users, involving programmers if necessary, and to test the fixes created by programmers.

By rechecking a fix, the tester adds checks to the checklists and conducts a detailed test of the functionality around the bug. Sometimes this is how the tester finds related bugs that the team can then fix before users can find them.

The updated checklists, along with other information that the tester entered into the tracker, will save time for the team that comes to support the project in the future and will allow them to quickly understand the project.

Leaving a memo to yourself is also a good idea. Small, short-term projects often become the basis of larger ones. After some time spent using the software, an order may come to write additional functionality.

Testing in a small project starts simultaneously with development and begins with determining the target audience and conditions for using the software. Based on the data received, the team chooses the devices, platforms and operating systems to test the product and considers the integration with existing systems.

This is followed by the requirements testing stage, during which the tester creates the most complete and consistent description of the product and its work. Here, the tester works with the user story and acceptance criteria, from which the tester draws up checklists and mind maps with a list of specific checks.

The next stages will be testing a prototype from a UX / UI designer, individual functionality from programmers and finished versions. Using a task tracker at all stages of a project is important not only for a long-term project, but also for a short-term one, as it helps to support the product, which is especially valuable when transferring a project to a customer.