In this article, we will talk about an example of a system for transferring text from paper documents into electronic form. We will look at two main stages: (1) the selection of areas with text on scans of documents, and (2) character recognition in these selections. We will also pay attention to the difficulties that can be encountered (along with the ways of resolving them) and present some options for system development.

The primary conversion of a document into electronic form consists of its scanning or photographing, which results in a graphic file in the form of a photo or scan. However, such files, especially high-resolution ones, take up a lot of disk space and cannot be edited. In this regard, it is advisable to extract text from graphic files, which can be successfully completed with optical character recognition (OCR).

About OCR and its goals

OCR is the conversion of images of typewritten, handwritten, or printed text into electronic text data. OCR data processing can be used for a variety of tasks:

Processing large volumes of documents using ready-made commercial OCR solutions often leads to high costs and low productivity. This is due to restrictions on the volume of processed documents. Therefore, it is necessary to develop your own system that can be used for organizations such as banks, real estate companies, universities, and other organizations that work with large volumes of paper documents. As an example, let's consider a single system based on the pipeline principle (OCR pipeline), in which the following operations are performed sequentially:

Before character recognition of the image with the document, it is advisable to extract the words and lines of text. There are two main approaches through which this can be done: neural nets and computer vision. Let's look at each one of these in more detail.

Recently, neural nets have been increasingly used to detect words in images. Using the ResNet family of networks, you can select rectangular frames of text. However, if the documents contain many words and lines, then the network data can be quite slow. Computational costs in these cases significantly exceed the cost of using computer vision methods.

In addition, ResNet models have a complex architecture and are more difficult to train for this task. This is because they are designed to classify images and detect only a small number of blocks of text. Using them would significantly slow down pipeline development and, in some cases, reduce performance. Therefore, it is necessary to turn instead to methods of line detection using computer vision. More specifically, we will focus on the method of maximally stable extremal regions (MSER) [1].

Figure 1. Examples of MSER detection of lines in documents

During MSER detection, the text in the binarized scanned image is initially ‘smeared’ into spots. Based on the subpixel calculations, the resulting spots are limited to connected areas and enclosed in rectangular frames (Figure 1). In this way, the source data is compressed, and images containing the words and lines are extracted from the scanned document. It is worth noting that this method does not depend on the colour of the extracted text. It is only important that it is sufficiently contrasted with the background.

The next step after MSER extraction of images with text is character recognition in them. Recently, AI research has shown that character recognition in images is most successfully performed on the basis of deep machine learning. Neural networks containing many levels (i.e., deep neural networks) are used, which are able to accumulate features and representations in the processed data.

Deep learning neural networks usually require large amounts of training samples for high-quality recognition. The manual mark-up and collection of training data is time-consuming and requires a lot of effort, so ready-made datasets are used more often, or already-marked data are synthetically generated. When creating training samples, it is important to use both high-quality lines and lines with various effects and distortions when scanning. As a result, it is possible to increase the resistance of the OCR system to distortion.

Figure 2, b. Strings from UW3 dataset

As a training sample, consider a University of Washington (UW3) dataset that consists of more than 80K lines of scanned pages with modern business and scientific English (Figure 2, b). To complicate matters, the set of geometric and photometric distortions as well as the set of fonts used in the lines are insufficient. Therefore, it is necessary to supplement the training sample with generated lines. This can be done using an automatic generator of text lines of different fonts, colours, backgrounds, etc (Figure 2, a). You can use 10 of the most popular fonts found in documents. These include Times New Roman, Helvetica, Baskerville, Computer Modern, Arial, and others.

More versatility regarding fonts can be achieved by using information from the Font Map (Figure 3). This map describes the relative position of the fonts, so you can then determine their similarity. In other words, the closer two fonts are to each other, the more similar they are. To retrain the network, several fonts are selected in the map that are the most remote from those that the model has already been trained on. 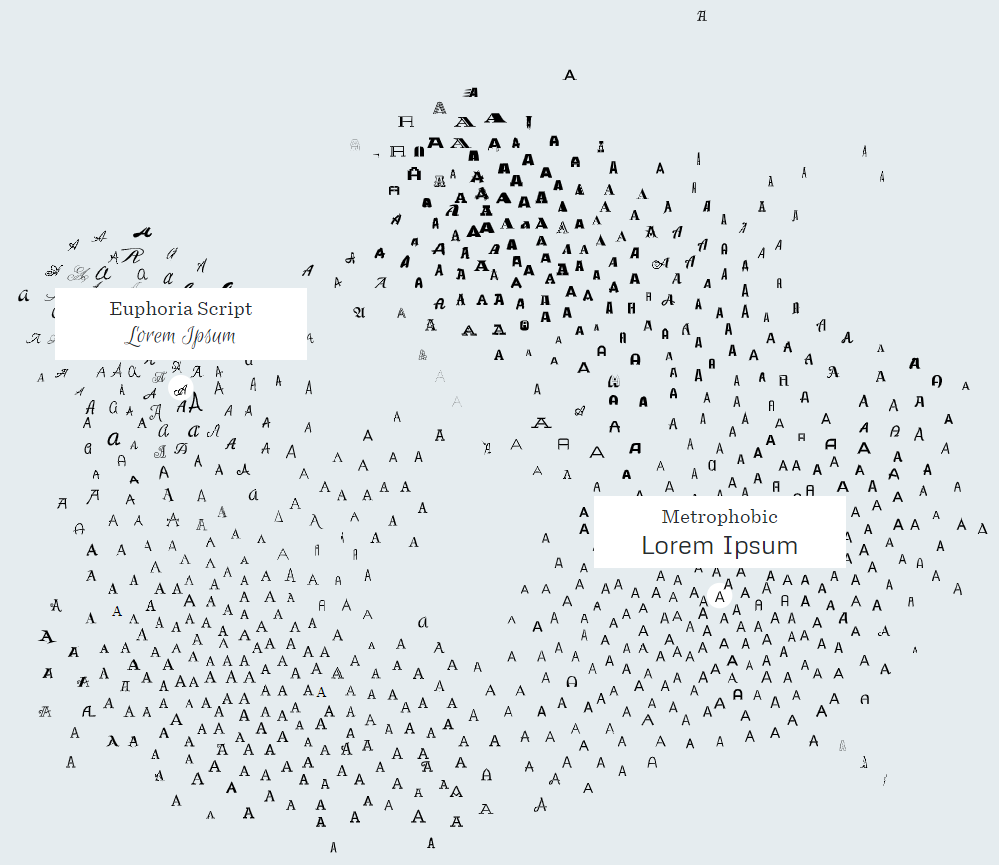 Input data for training and network recognition are parts of scanned images with strings or words extracted during the MSER detection. Output data are ordered sets of characters that form text in electronic format.

CNNs, or convolutional neural networks [2], are effectively used for character recognition in images, forming representations of parts of images similar to the human visual system.

In the pooling layer, the dimension of the output of the convolutional layer is reduced in two steps (Figure 6):

The figure above shows an example of a pooling layer using ReLU and max pooling. Output values are passed to the input of the next convolutional block or pulled into a vector for a fully connected layer if there are no more convolutional blocks.

In our case, convolutional blocks alone are not enough. This is because large amounts of data must be processed, and it is necessary to consider the sequence of characters in lines. Therefore, we can use a hybrid architecture consisting of the following (Figure 7):

Note that by the end of the iterative process, the maximum accuracy in the validation sample is almost the same. On the contrary, the accuracy values of the test sample differ significantly, as adding rows from the UW3 dataset to the generated rows increases the recognition accuracy. However, increasing the fonts in the synthetically generated strings also slightly increases the recognition accuracy.

The neural network is trained according to the ‘early stop’ principle: after a certain number of iterations, a randomly selected subset of lines from the training sample (validation sample) is recognised. If the maximum accuracy value does not change during several such checks, then the iterative learning process is stopped, and the weights of the neural network for recognising strings from documents are saved. The learning time is calculated from the start of the iterative process to the stop. We would use Nvidia GPUs of the Tesla family (K8 and V100) for this process.

We consider documents with a scanning resolution of 96 dpi in English. The text can be different colour, thickness or leading. The built architecture allows us to achieve an accuracy of character recognition up to 95–99%.

Thus, as output, we get characters combined into words or strings that form electronic documents.

Significant acceleration of document processing is achieved by organising the recognition system on the principle of a pipeline with minimal downtime (Figure 8). This process also involves parallelising calculations in the CPU and GPU in conjunction with the rational use of memory. Docker and Kubernetes are used to deploy such systems.

Figure 8. Organisation of the OCR AI recognition system based on the pipeline principle.

The length of the rectangular blocks describing the processing procedure schematically corresponds to the time interval. The execution time for each procedure may vary depending on the number of characters in the document.

To improve the quality of MSER detection, mathematical methods of digital image processing are used, which, among other things, exclude unwanted noise that naturally occurs when scanning paper documents. When implementing image processing and the MSER detection of words and lines, it is convenient to use the Python language via the OpenCV computer vision library.

To improve the quality of training, protection against overfitting, and subsequent recognition in the AI neural network, adaptive updating of the network weights [5], dropout decimation [6] and batch normalisation [7] are used. When implementing a deep learning neural network for production, it is advisable to use one of the Tensorflow or Pytorch frameworks. Nvidia GPU computing is supported using CUDA and CuDNN technologies.

Additional performance gains can be achieved with the help of TensorRT technology [8], which is designed for optimal use of network weights when computing in GPUs produced by Nvidia (e.g., Tesla or k8). The weights of the trained models are converted to a more compressed floating-point format. This allows for a computing speed that is more than 40 times faster in the GPU compared to the CPU without any visible loss of recognition accuracy.

Let us highlight several directions of development for the considered system.