In this article, I would like to tell you about the decision of our team to apply the CQRS & event sourcing approach to an online auction project. I’ll also cover the results, conclusions and hidden pitfalls you should avoid.

Let's start with some business background. A client came to us having a platform for holding so-called timed auctions, which had already been in production. The client wanted us to create a platform for live auctions.

An auction means selling certain items (lots), where buyers (bidders) place bids. The buyer who offered the highest bid becomes the new owner of the lot. At timed auctions, each lot has a predetermined closing time. Buyers place bids, and at some point, the lot becomes closed. It is similar to eBay.

The timed platform was made in a classic way, using CRUD. Lots were closed by a separate application, starting on a schedule. It worked unreliably. Some bids were lost, some were made as if on behalf of a different buyer, lots were not closed or were closed several times.

Live auction is an opportunity to participate in a real offline auction remotely via the Internet. There is a premise (we call it a ‘room’) where there is a host of an auction with a hammer and an audience, and also there is a so-called clerk with a laptop, who, by pressing buttons in the interface, transfers the course of the auction to the Internet, and buyers connected to the auction see offline bids and can place their bids.

Both platforms work in real time, but in the case of timed auctions, all bidders are in an equal position, and in the case of live auctions, it is extremely important that online bidders can successfully compete with those in the room. It means that the system must be very fast and reliable. Negative experience of using the timed platform made it clear that the classic CRUD is not suitable for us.

We did not have our own experience of working with CQRS & ES, so we consulted with our colleagues who had it (we have a big company), presented them our business realities and jointly we came to the conclusion that CQRS & ES should suit us.

Some more specifics of online auctions:

A short review of the CQRS & ES approach

I will not dwell on the CQRS & ES approach, there is a lot of information about it on the Internet. However, I will briefly remind you of the main points 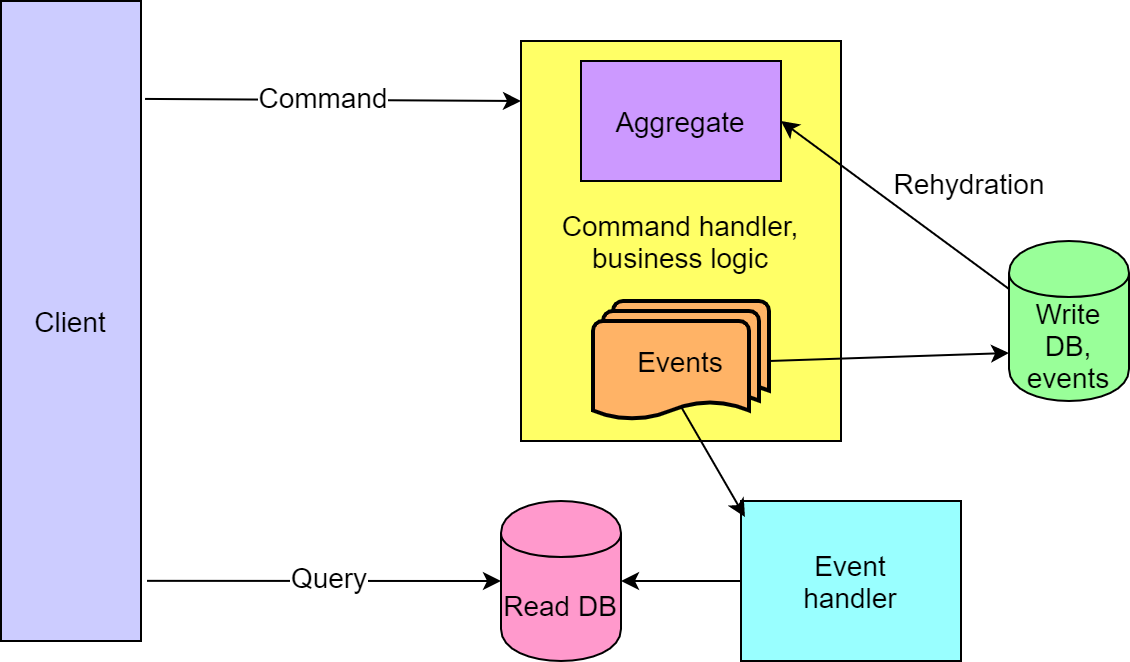 In order to save time, as well as due to the lack of specific experience, we decided that we need to use some framework for CQRS & ES.

In general, our technology stack is Microsoft, i.e. .NET and C #. Database is Microsoft SQL Server. Everything is hosted in Azure. A timed platform was made using this stack, it was logical to make a live platform using it.

At that time, Chinchilla was almost the only option suitable for our technological stack. So, we decided to use it.

Why do we need a CQRS & ES framework at all? It already can cope with such problems and support such aspects of implementation as:

Thus, taking into account the use of Chinchilla, we added to our stack:

Yes, the frontend is made on Angular platform.

As I have already said, one of the requirements for the system is that users can find out the results of their actions and the actions of other users as quickly as possible; this is applied to both buyers and the clerk. Therefore, we use SignalR and web sockets to quickly update frontend data. Chinchilla supports SignalR integration.

One of the first things to do when implementing the CQRS & ES approach is to determine in what way a domain model will be divided into aggregates.

In our case, the domain model consists of several main entities, like this:

We have got two aggregates: Auction and Lot (with Bids). In general, it is logical, but we did not take into account one thing, it’s the fact that with such a division the state of the system is spread over two aggregates, and in some cases, to maintain consistency, we must change both aggregates, but not only one of them. For example, an auction can be paused. If the auction is paused, you cannot place a bid on a lot. It would be possible to pause a lot itself, but the paused auction also can’t process any commands unless it is ‘unpause’.

Alternatively, only one Auction aggregate could be made having all lots and bids inside. But such an object would be quite heavy, because there can be thousands of lots in the auction and dozens of bids per lot. During the lifetime of an auction, such an aggregate will have a lot of versions, and rehydration of such an aggregate (sequential application of all events to an aggregate) will take quite a long time if no snapshots of aggregates are made. This is unacceptable for our situation. If you use snapshots (we use them), then the snapshots themselves will weigh a lot.

Such circumstances must be taken into account when breaking down the domain model into aggregates.

At this stage of the project development, we use two aggregates (Auction and Lot), and we violate the architecture by changing both aggregates within some commands.

Applying a command to a specific version of an aggregate

If several bidders place a bid on the same lot at the same time, that is, they send a ‘place a bid’ command to the system, only one of the bids will be successful. A lot is an aggregate, it has a version. When processing the command, events are generated, each event increments a version of an aggregate. There are two options:

Errors when executing a command using a queue

In our implementation which is heavily depended on Chinchilla, the command handler reads commands from a queue (Microsoft Azure Service Bus). We clearly distinguish situations when a command fails for technical reasons (timeouts, errors in connecting to a queue/base) and for business reasons (an attempt to place a bid on a lot of the same amount that has already been accepted, etc.). In the first case, the attempt to execute a command is repeated until the number of repetitions specified in the queue settings is reached, after which the command is sent to the Dead Letter Queue (a separate topic for unprocessed messages in the Azure Service Bus). In the case of business reasons, a command is sent to the Dead Letter Queue immediately. 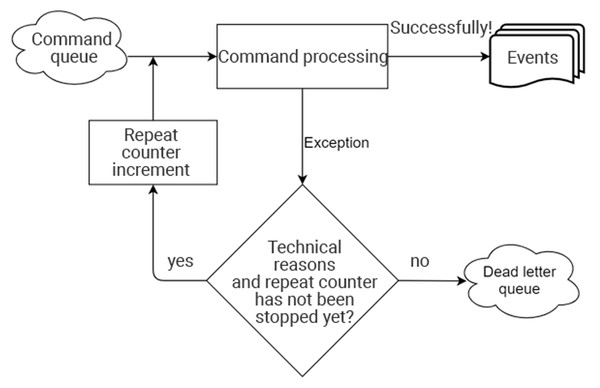 Depending on the implementation, events generated as a result of a command execution can also be sent to a queue and taken from the queue by event handlers. When processing events, errors can also occur.

In comparison with an unexecuted command, the situation is more complicated in this case. A command may be executed, and the events may be written to the write database, but the handlers may not be able to process the events. And if one of the handlers tries to update the read database, then the read database will not be updated. That is, it will be in an inconsistent state. Due to the mechanism of repeated attempts to process an event, the read database is eventually updated, but there is a risk that the database will be broken after all the attempts.

We have faced this problem. To a large extent, it has happened, because we had some business logic in the event processing, which, in case of an intense bid placement, can fail from time to time. Unfortunately, we realized it too late, it was not possible to change the business implementation quickly and simply.

As a result, we decided to temporally stop using the Azure Service Bus to transfer events from the write part of the application to the read part. Instead, the so-called In-Memory Bus is used, which allows you to process the command and events in one transaction and, in the case of failure, roll back the whole transaction. 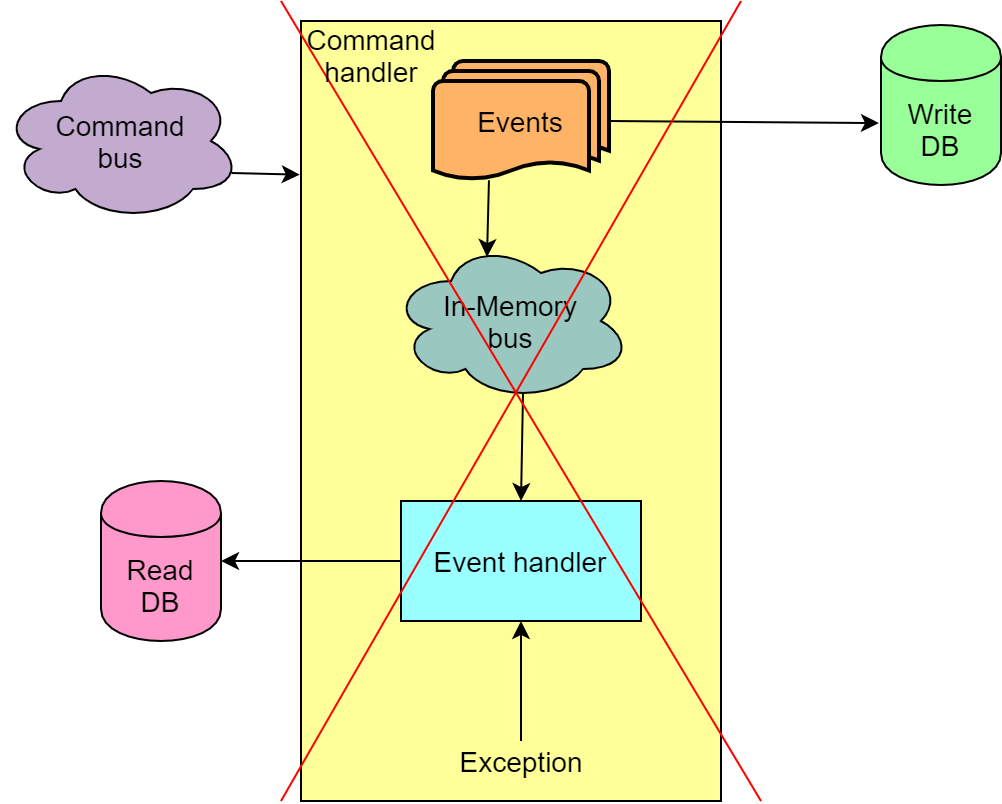 Such a solution does not contribute to scalability, but on the other hand, we exclude situations when the read database breaks, resulting in the breaks of the frontends. The continuation of an auction without re-creating the read database by replaying all events becomes impossible.

Sending a command in response to an event

It can happen, but only in the case when the failure to execute this second command does not break the state of the system.

Processing multiple events of one command

In general, the execution of one command results in several events. Sometimes we need to make some change for each of the events in the read database. In some cases, the sequence of events is also important, and if the sequence is wrong, events will not be processed appropriately. It means that we can’t read the queue and process the events of one command independently, for example, with the help of different instances of code that reads messages from the queue. Plus, we need to know for sure that the events from the queue will be read in the same order in which they are sent there. Or we need to agree that some events of the command won’t be successfully processed during the first try. 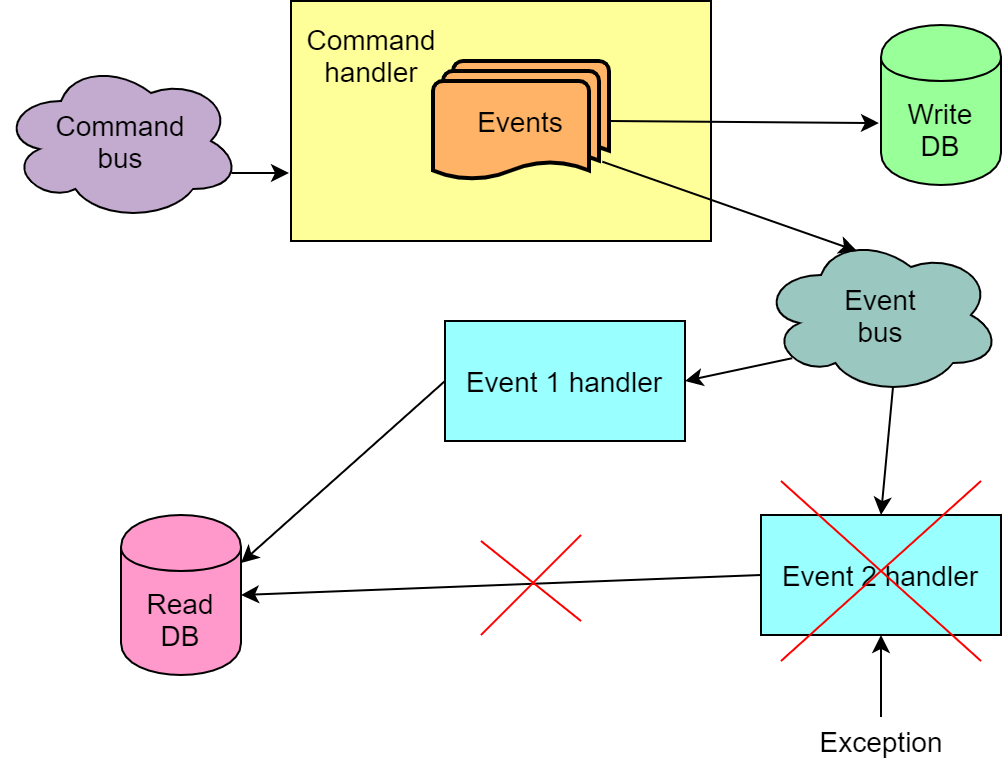 Processing one event with multiple handlers

If the system needs to perform several different actions in response to one event, usually several handlers are used to process such an event. They can work in parallel or sequentially. In the case of a sequential work, if one of the handlers fails, the entire sequence is restarted (it’s so in Chinchilla). In case of such an implementation, it is important that the handlers are idempotent, so that the handler which has successfully performed one run doesn’t fail the second run. Otherwise, when the second handler of the chain fails, the chain won’t work properly, because the first handler will fail during the second (and subsequent) attempt.

For example, an event handler in the read database places a bid of 5 rubles on a lot. The first attempt to do this will be successful, and the second won’t be executed, because of the constraint in the database. 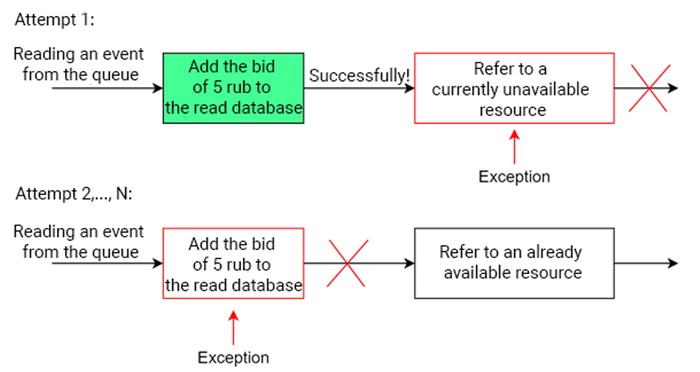 Now our project is at the stage when, as it seems to us, we have already faced most of the hidden pitfalls relevant to our business specifics. Overall, we consider our experience to be quite successful, CQRS & ES is well suited to our subject area. We would like to stop using Chinchilla and choose another framework that gives more flexibility for further development of the project. However, it is also possible to stop using framework at all. It is also likely that we will make some changes in order to find a balance between reliability on the one hand and the speed and scalability of the solution on the other hand.

As for the business component, there are still some open questions, for example, dividing a domain model into aggregates.

I hope that our experience will be useful, will help save time and avoid hidden pitfalls.

Blog Posts Creating Truly Reliable Plugins Based on the Managed Add-In Framework
For one of our projects, Managed Add-In Framework (hereinafter MAF) became the best option for implementation of diverse customer requirements. Here are some nuances of working with MAF.
Blog Posts Testing Strategy in a Short-Term Project
The strategies and testing tactics used for long-term projects are not very suitable for small ones. Here we show, how to design a testing strategy for a short-term project and put it into practice.
Blog Posts Action Filters to Create Cleaner Code
There are many ways to solve the annoying problem of duplicate code. In this post, we show how action filters can be used to clean up the code.
1 8